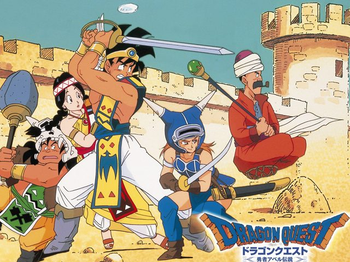 The anime series Dragon Quest: Legend of the Hero Abel (Abel Yuusha) was a loose adaptation of Dragon Quest III into anime, mostly keeping only the name of the enemy, Baramos. It was one of many adaptations of various Dragon Quest games, of which Dragon Quest: The Adventure of Dai was three episodes longer in its first anime version.

The initial release date in Japan was 1989-1991 and the first 13 episodes (of 43) were dubbed into English in 1991 and aired on TV in America (as Dragon Warrior) by Saban Entertainment. Moreover, it was released in the dry period between Robotech (1985) and Ronin Warriors (1995) when almost no anime appeared on American television. The dub was fairly lightly edited, and most of the original names (which were pseudo-Western anyway) were kept.

The main character is Abel, a young warrior on a quest to rescue his friend Tiala after she was kidnapped by Baramos because of the Red Stone she received. This Stone is the one artifact that could release the Dragon of legend, giving Baramos the power to rule the world. Abel learns that he's the One Chosen to bear the Blue Stone, the artifact with the power to seal the Dragon after it's released. He's joined first by his other friend MokoMoko, and later by the wizard Yanak and the mercenary Action Girl Daisy, generally traveling from town to town following a trail of clues and prophecies about the Dragon to find a way to defeat Baramos and rescue Tiala.

The dub was often given poor time slots and wasn't successful, nor has it ever been released on home video. Japan eventually got a release of the series on DVD, but for some time the main version that existed in Japan was in the form of Compilation Movies.

As usual for the Dragon Quest series, Akira Toriyama created the character designs.