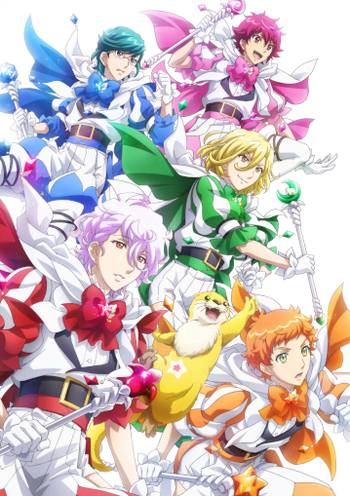 Thirteen years after the Battle Lovers saved the planet twice over, Binan High is as lively as ever. Kyotaro Shuzenji, Taishi Manza, Ryouma Kirishima, Ichiro Dougo, and Nanao Wakura spend their days in the irrelevantly-named Earth Defense Club, ditching class, drinking tea, and having an uneventful but lax life. When they decide to hit up their local bath house, however, Ryouma ends up pulling a fully clothed human out of the bath. The man immediately tells the boys about his plight— that he's a prince from the far-off Magical Land of Honyalaland and he needs to prove his worth of ruling their domain— and finishes by asking them for assistance. The boys don't believe a word and leave, but the prince (now an otter) transports them into the path of a monster rampaging around their school to show them he wasn't kidding. Now tasked with fighting it off, the boys are given Happy Braces and are forced to become the prince's Happy Knights, fighting for peace, love, and happiness whether they want to or not. Meanwhile, Binan's new student council - Ata Ibusuki, Taiju Unazuki, and Maasa Shirahone- have just gotten into contact with a fennec fox that wants to rule over the land with fear...

As you might have guessed, Cute High Earth Defense Club Happy Kiss! is the sequel to the ever-popular Magical Girl Warrior spoofing Boueibu franchise. It premiered during the Spring 2018 Anime season, produced by Studio Comet like the predecesor's second season.