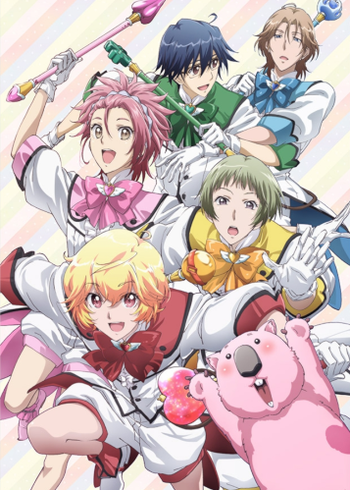 Cute High Earth Defense Club LOVE! (Binan Koukou Chikyuu Bouei-bu LOVE! — to save time, call it Boueibu) is a Winter 2015 Anime which is a parody of Magical Girl series, specifically of the Magical Girl Warrior type. It's produced by Diomedea under the eye of Shinji Takamatsu (of Daily Lives of High School Boys and Gintama fame) although the original concept is credited to Kurari Umatani. Its main English page is here

and an online manga about the Conquest Club is here

and another online manga, this time about the Defense Club, is here

(but they're in Japanese). Three light novels are also out there, and an Otome Game for smartphones has been released. A season 2 was confirmed

August 2015, airing date July 2016 but it was done by Studio Comet instead of Diomedea. A live stage adaptation

En Yufuin, Atsushi Kinugawa, Io Naruko and Ryuu Zaou make up the Earth Defense Club, a club at their all-boys school which doesn't do any defending of Earth (or anything really). One day, En and Atsushi are hanging out at the local bath house, run by the family of their kouhai Yumoto Hakone, when a pink wombat claiming to be an alien falls out of a portal and tasks them with saving the Earth. Of course, like most sane people when faced with a talking marsupial, En and Atsushi run away, but the wombat — itself pursued by Yumoto — follows the boys back to their clubroom. There he grants the five teenagers “lovracelets”, and forces the Earth Defense Club to start doing what their name says, much to their chagrin. Meanwhile, the student council — Kinshiro Kusatsu, Ibushi Arima and Akoya Gero — meet Zundar, a green hedgehog from the planet Evil who wants to conquer the world.

It's licensed in the US and Canada by Ponycan USA. Funimation has the rights

to air Boueibu as part of their Winter 2015 lineup.

For Australia, Madman Entertainment has snagged it

for Anime Lab. Everyone note  aside from those in Asia, that is can see it using Crunchyroll

In 2017, the series received an OVA continuation, focusing on the seniors graduating and being a partial Recap Episode for everything that's happened in the second season. This was followed with a new series announced in 2018— Cute High Earth Defense Club Happy Kiss! (Binan Koukou Chikyuu Bouei-bu Happy Kiss!), taking place some 13 years after the original series with five brand new characters as the leads, and fight for happiness instead of love. That series aired as part of the Spring 2018 season.