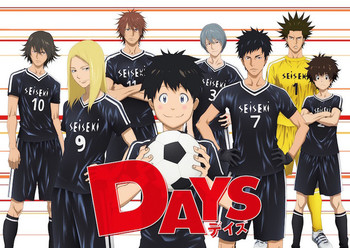 Tsukushi Tsukamoto is a shy first-year high school student who has no particular special talents or traits. On his first day of school he is asked by a classmate, Jin Kazama, to play a football game with him as he's down one person. This gets Tsukushi interested in this sport. Tsukushi is a beginner at football but decides to join his school's team, along with Kazama. Despite his lack of experience he is determined to play the best he can.

DAYS is a manga about a high school football team, which ran in Shōnen Magazine from 2013 to 2021. An animated adaptation was produced by MAPPA for the Summer 2016 season.