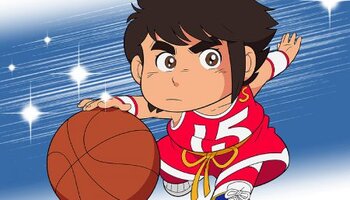 Dash Kappei is a manga/anime created by Noboru Rokuda, first published in 1980 in Weekly Shōnen Sunday and later adapted into a 65-episode anime in 1981 by Tatsunoko Production, broadcast on Fuji Television. It’s one of the first parodies of the sports manga genre from the 80's, and one of the most internationally popular.

The story is about a very short but incredibly athletic student named Kappei Sakamoto. Despite his stature, he decides to join the basketball team of his school and quickly becomes the star player and admired by everyone, including Akane, a pretty Girl Next Door and Kappei’s love interest. Perhaps, one of Kappei’s most notable quirks is his obsession with girls and their panties, preferably white.

The anime, which achieved a fair level of popularity in Europe, is also known as Gigi la Trottola in the Italian Dub and Chicho Terremoto in the Spanish dub.