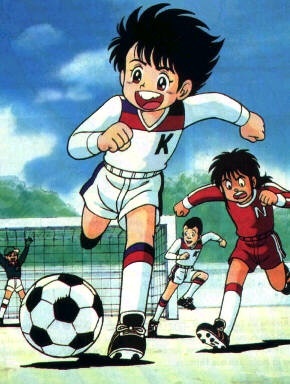 Ganbare Kickers is a sport manga by Noriaki Nagai, which was serialized in CoroCoro Comic from 1985 to 1989. It was later adapted into an anime series by Studio Pierrot, which aired from 1986 to 1987 for 26 episodes. It's also known as Palla al centro per Rudy (Italy), But Pour Rudy (France), Supergol (Spain), Kickers (Germany), or Pilkarze (Poland).

A Spiritual Successor to Captain Tsubasa, it's the story of a Tsubasa-like kid named Kakeru Daichi who moves into another town with his family and joins an underdog soccer team. Despite the team being repeatedly defeated and dismissed, Kakeru is able to motivate the players thanks to his talent and determination. The Kickers enter the kid championship and slowly start getting better results and winning their first matches.

The series was quite successful in Germany and Austria, not so much in Italy, Spain, and France where it was largely overshadowed by Tsubasa's popularity. It's worth noting that, despite the many similarities with Captain Tsubasa, there are also some notable differences. Here the main character is not an Invincible Hero, it's slightly more realistic and there are less Improbable Sports Skills (if you ignore the trio of players from the rival team), and unlike Captain Tsubasa where everything is about soccer and played very seriously, this is more of a light-hearted comedy about the friendship of a group of teenagers who happen to love soccer even if they are not exactly champions. And while soccer is their primary interest, there are occasional subplots about their personal life (and sometimes, love life).