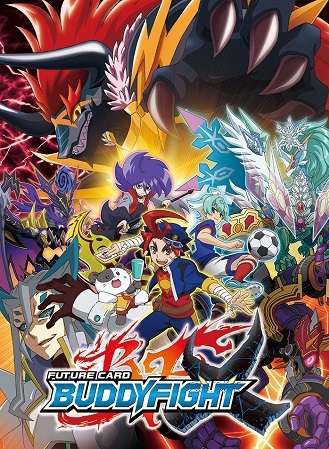 Break out your Future Card!
Get ready for a cool new card game that connects to a parallel universe! Special cards act as portals, bringing monsters to Earth to become Buddies with humans and, through friendship and courage, help them take on fight challenges—it's called Buddyfight!
— Opening Narration at the beginning of episodes 1-33.
Advertisement:

20 Minutes into the Future, Earth has been linked to a parallel world of monsters and magic through a new Collectible Card Game named Future Card Buddyfight. By using a "Buddy Rare" card as a portal, normal humans can become partners with a monster and call upon them to battle other players in "Buddyfights". As some humans choose to use the power of their Buddy to commit crimes, a law enforcement agency called the Buddy Police tracks down and confiscates the Decks of those who violate the law.

Gao Mikado is an eager young martial artist who becomes Buddies with the Hot-Blooded Drum Bunker Dragon. Receiving a Core Deck Case from Tasuku Ryuenji, a Buddyfight prodigy working for the Buddy Police, he takes his first steps into the fantastic world of Buddyfight.

Future Card Buddyfight is the Lighter and Softer sister show to Cardfight!! Vanguard, another property of Bushiroad. It is explicitly targeted at a younger audience (elementary school kids), which is reflected in the simpler design of the tie-in Collectible Card Game. While the show can be very serious, it never shies away from being self-aware and poking fun at its own weirdness.

A second season called Future Card Buddyfight Hundred began airing in April 2015. In this season, Gao joins the Buddy Police to help deal with a mass invasion of the Hundred Demons: one hundred monsters who have betrayed their origin worlds in exchange for power from a world-eating monstrosity called Yamigedo.

A fourth season, Future Card Buddyfight X, began in April 2017. With Bal gone, Gao becomes Buddies with a powerful demonic dragon named Batzz. Together, the two enter the World Buddy Masters, a tournament in which ten participants, each representing a World, duke it out and the winner of the tourney gets the legendary and powerful Mirage Card.

A mini-season and continuation of X, Future Card Buddyfight X: All-Star Fight, began in April 2018. Shortly after defeating Wisdom and stopping the Chaos Control company, a new tournament is announced—the GGG Cup, where familiar Buddies and Buddyfighters alike compete for the top.

New episodes are simulcast in Japanese and English, with the latter being made available on the official Youtube channel

. Though it should be noted that episodes 26-50 of Hundred and the entirety of Triple D are sub-only due to unknown reasons. However, the dub resumed (albeit now two episodes behind the Japanese broadcast instead of simultaneous) in April 2017 with the premiere of the fourth season. As of All-Star-Fight, the dub was further delayed and now lags behind the Japanese broadcast by four episodes.

After the premiere of All-Star Fight, a sequel was announced that premiered in June 2018—Future Card Buddyfight ACE (Future Card Shin Buddyfight in Japan), which stars Gao's son Yuga and his Buddy, Gargantua Dragon as the new protagonists.

After the end of Buddyfight Ace, due to production issues, Bushiroad had ended the anime and continued Buddyfight Ace in the manga involving other Dragods.

In June 15th, 2020, it was announced that Bushiroad would discontinue the entire Buddyfight franchise in all regions due to declining sales. The final set of the card game was released in September 15, 2020, with official events and support for the game continuing until June 30, 2021.

You can check out the official site here

. You can catch the manga adaptation in CoroCoro Comic.

Not to be confused with Buddy Complex, another Sunrise anime that aired on the same season as Buddyfight's first season.