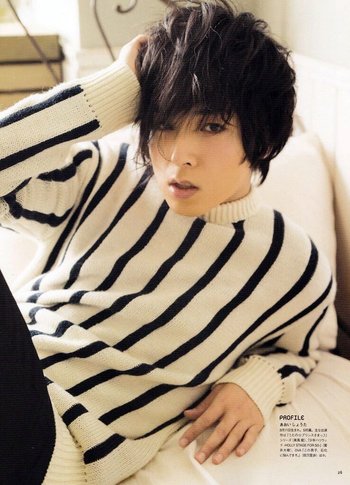 Shouta Aoi (蒼井 翔太, born August 11, 1987) is a singer, actor, and voice actor. As a performer, he's quite the popular person; affiliated with 2 different production companies for his activities (King Records for singing, and S Inc. for voice work). He's known for his light, feminine voice and features, which unsurprisingly earned him many voice acting and stage play roles as Bishōnen young men, and in many cases a cross cast role as a girl (and an attractive one too). You'll often see him voicing characters in music-based shows or idol series because of his musical background.

Shouta Aoi first started his career as a singer after being a finalist in the Yamaha Teen Music Festival 2004. He debuted in 2006 under the Stage Name "Showta", but his singing career never fully took off. After leaving his label, he started releasing music independently under the name "Noboru Ryugaki." He started to gain prominence in The New '10s through being in stage productions, but what snowballed his newfound popularity was his Star-Making Role in Uta no Prince-sama, leading him to have a Career Resurrection in music.

These days, he's one of the most popular voice actors of The New '10s and has even been nicknamed a "Great Angel" due to his soft voice.

He can also time travel.