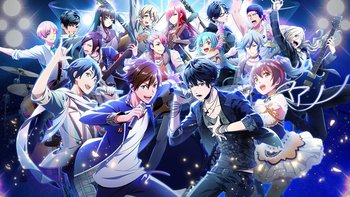 Four bands aiming for the top

Band Yarouze! is a music rhythm game developed by Delightworks and Sony, released by Aniplex.

Band Yarouze! tells the story of four bands and their aim to reach the top of the music world.

Much later in the story, each band will meet an apprentice of the live house EDEN, where the band hosted their lives, who served as the player's Author Avatar, along with two rival bands, FREEZING and Crystal Cross, and the Four Virtuoso's. Individuals who are amazing at their field in a band. The story also introduces magic like elements in the world of music that affected the music scene in Band Yarouze and how it affects the casts' performance.

The game was launched at October 2016. Unfortunately, the game was announced to be closed down just before the second anniversary hits and services for the game had officially closed down in April 2019. However, the voice actors still do lives for the game's music even as the game is closed down, and oddly still gets collaborations.