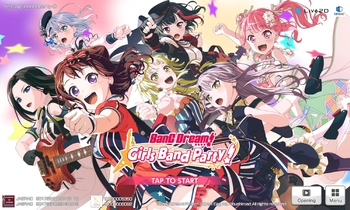 BanG Dream! Girls Band Party! is a Rhythm Game for iOS and Android, as part of the BanG Dream! multimedia franchise. It was developed by CraftEgg and published by Bushiroad, released in Japan in 2017 and in the rest of the world in 2018. A Nintendo Switch version of the game was announced on the game's 6th anniversary, set to release in 2021.
Advertisement:

Like with many idol rhythm games for mobile, the game has you arranging a deck of cards into a band, with each card showing unique art of one of the game's 25 main characters and having its own power rating and skill. The band's total power rating influences the maximum score that the player can earn on a song, while skills activate upon hitting yellow-colored notes and have different gameplay-related effects such as temporarily raising the amount of points per note, converting off-beat hits into Perfect hits, and restoring the player's health.

Unique to this game is Multi Live mode, a Co-Op Multiplayer mode where the player gathers in a team of up to five players, each of which only uses the center member of their current band, to play one song together. When any player triggers their card's skill, the skill applies to all players, allowing players to help boost each other to a high score or save each other from failing out. All players' scores are combined into a single total team score, with more emphasis on playing well as a group over who gets the most points.

The game also expands on the series' lore, having a main story campaign where you, along with the rest of the staff of Live House CiRCLE, try to get five bands together for a big multi-band event.