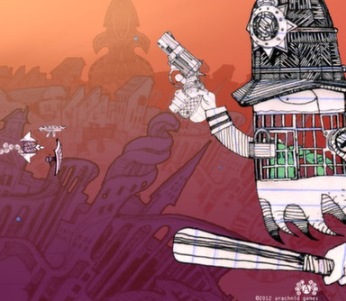 An average moment in Ballpoint Universe Infinite. It's that kind of game.
Advertisement:

As a young doodle freshly spawned from the Idea Spring, you are thrust headfirst into a war against the hordes of the Logicians, cold and emotionless doodles intent on subjugating the whole land. But who really are the Logicians, and what is it they truly want? Up to you to find out.

Ballpoint Universe Infinite is an indie game created by Arachnid Games. It is primarily a horizontal shooter, but also has RPG Elements as well as some platforming. You explore a vast and gorgeous overworld (that's the platforming part), collecting golden sketches and speaking with various wacky characters. Some of them will have missions for you, which you accomplish using a fighter ship. As you destroy enemies and complete missions, you gain Ink, which you can use to buy and upgrade weapons and other ship parts.

The game was first released for PC on May 10th, 2013, and was then ported to iOS on November 19th, 2013, and then to Wii U on October 16th, 2014. It is mostly known for its unique art style, as the name implies everything is hand-drawn by pen and the result truly has to be seen to be believed