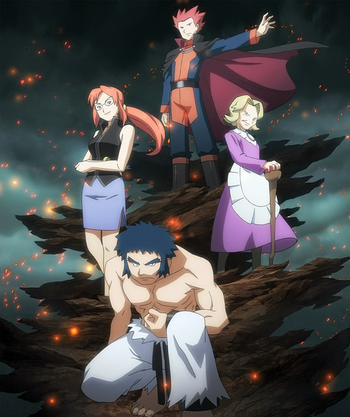 Four trainers. No breaks.Clockwise from bottom Bruno, Lorelei, Lance, and Agatha.
"The final four monsters always win. Even the ultimate masters are sent down to defeat. Prepare your excuse for losing!"
— Dedar, Wario's Woods
Advertisement:

Historically, the name 四天王 (shitennō), meaning "Four Heavenly Kings", was applied to a samurai lord's four best men, which is the root of the "four subordinates to a powerful leader" trend in many Japanese stories. The Four Heavenly Kings themselves are Buddhist guardian gods of the four cardinal directions. In western works, four may be a nod to the Four Horsemen of the Apocalypse to similar effect.

Pop culture has taken both types of groups and expanded the concept to just mean an extremely powerful/competent group of four, sometimes in the service of one even more impressive master. Because that technically makes five in total, this could also overlap with Five-Man Band if the archetypes match up to those specific formations. Bear in mind there is a slight but noteworthy difference between a team of five with an internal leader, and a team of four with an external master, so while they may overlap they aren't one and the same.

The Elite Four are usually antagonists but they don't have to be evil. Occasionally even good guys will employ an Elite Four.

The Elite Four also tends to overlap with Quirky Miniboss Squad and Praetorian Guard. They may function as a Rogues Gallery such that each member gets a fair amount of screentime and development. Or you could just have to Run the Gauntlet and face them all at once. Normally unrelated to Four Is Death; examples should never be listed under both unless the association with death is extremely unambiguous.

Example of:
Four Is Death