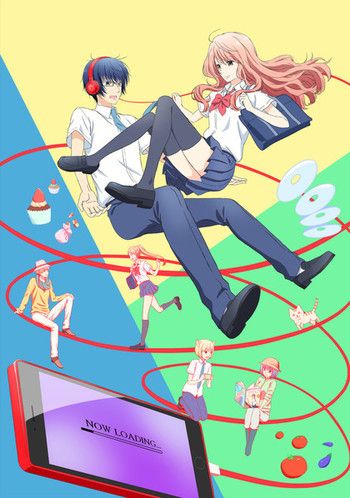 Real Girl (3D 彼女 リアルガール, 3D Kanojo) is a manga series written and illustrated by Mao Nanami. It was published by Dessert from July 2011 to May 2016 and features 12 volumes.

High school student Hikari Tsutsui is a Misunderstood Loner with a Heart of Gold who has no interest in dating and is content with only encountering girls from anime and video games. His life unexpectedly changes when he arrives late at school and is forced to clean the pool as punishment, alongside the beautiful Iroha Igarashi, who is also considered an outsider by other students. At first reluctant to even talk to Iroha, Hikari is able to overcome his insecurity and defend her from bullies. In yet another pool-cleaning task, they decide to start a relationship. The catch? Iroha is due to change schools at the end of the year.

An Animated Adaptation by Hoods Entertainment premiered on April 4, 2018, with a second season scheduled to premiere in January 2019. In addition, a Live-Action Adaptation, directed by Tsutomu Hanabusa and starring Ayami Nakajo as Iroha and Hayato Sano as Hikari, was released on September 14, 2018. trailer here