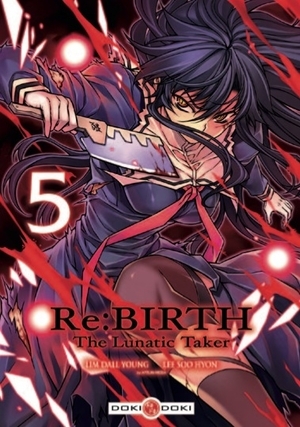 Re:Birth: The Lunatic Taker is a manga by the manhwa team Im Dal Young and Lee Soo Hyun. Like previous series by Im Dal Young (Freezing, Black God), the series male protagonist takes a backseat in favor of having a strong female lead fighting most of the battles.

Reiji is your typical high-school student living with his big sister Ayaka. One day he stumbles upon a pair of bracelets on the sidewalk. He picks them up and tries to find the owner but gets sidetracked as a bag snatcher runs his direction. He tries to stop him but is stabbed and killed. On the brink of death he hears a voice from the bracelets "If thou wishes to live form a contract." What has Reiji gotten himself into? And what exactly does the contract entail?

Oh and his sister is a psycho.

The manga was later followed by Sai Taker, an alternative setting/sequel, although the manga is followed by Re:Birth: The Life Taker.

The manga features examples of: