Manga / Recently, My Sister Is Unusual 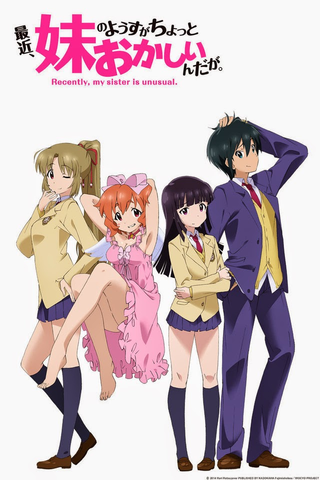 A girl named Mitsuki Kanzaki lives with her step-brother Yuya after her mother remarries. One day, Mitsuki is possessed by the self-proclaimed spirit of a young girl, Hiyori Kotobuki. Hiyori (in Mitsuki's body) must fall in love with Yuya to move towards the "Gates of Heaven." To do so, she has to wear a chastity belt with a "feeling gauge" she needs to fill regularly so the steps towards Heaven's gate appear. However should she (Mitsuki) refuse to do so, she will die.

Also known as "ImoCho" or "Recently, My Sister is Unusual" (its English translation "Lately, My Little Sister's Been Acting A Bit Strange, But."), a manga series by Mari Matsuzawa that debuted on November 9, 2010.

An anime television series adaptation with twelve episodes premiered on January 4, 2014. Crunchyroll is streaming the anime, and can be legally watched here

, for viewers in the USA, Canada, UK, Ireland, South Africa, Australia, New Zealand, Scandinavia, The Netherlands, Latin America, Europe, and the Middle East. An OVA aired on June 30, 2014. The anime was put under investigation by Japan's Broadcasting Ethics and Program Improvement Organization due to its lewd subject matter and airing at a time slot that made it easily accessible to children.