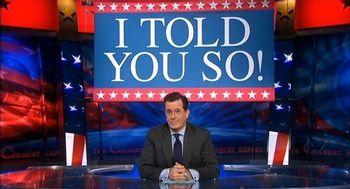 The Prince of Smugness
Sadlygrove: Yugo? Amalia?
Piglet Yugo: *Oink*
Piglet Amalia: *Oink*
Sadlygrove: I would hate to play the "I warned you" card... [deep breath] BUT I WARNED YOU!
— Wakfu, "The Dragon-Pig"
Advertisement:

A character is (sometimes, quite specifically) warned of the horrible things that can happen if they do Action A. They blow off the warnings and the evidence to back it up. After the terrible things happen, The Cassandra then informs them they have no-one to blame but themselves. Depending on Alice's personality, the tone of the work and what the consequences are, she might be smug about being right or angry that Bob didn't listen, among other reactions.

Alice: Do not take the Shmuck Bait, you idiot. If you do, terrible things will happen. Do not tempt fate.
Bob: What's the worst that can happen?
[terrible things happen]
Alice: I Warned You.

That statement, whether or not it uses the Stock Phrase "I Warned You" or "I Told You So" is this trope, provided the warning took place. If it did not, due to Poor Communication Kills, Not Now, Kiddo, or the warning not reaching its intended recipient, but the Stock Phrase is dropped anyway, the trope has been inverted, not played straight.

Generally — though not always — Played for Drama if played straight. The victim may ask The Cassandra for help in solving whatever problem they caused, much to the Cassandra's aggravation. The Cassandra may also say Screw This, I'm Outta Here and flat-out refuse to help the victim with their predicament, particularly if they've been pushed to the breaking point by the victim insulting their warnings or just the victim's sheer stupidity. Even the Only Sane Man can only take so much abuse.

If Played for Laughs, expect The Cassandra to be an exaggeratively smug or jerkish in using this trope (a likely consistent trait that lent to no-one listening to them in the first place) and at least one indignant victim to try and silence them (usually by yelling a bitter "Oh Shut Up!"). Due to often gloat-heavy context of this trope (and the likely two-way arrogance that caused them to be ignored in the first place), the previously dismissive characters at the very least will often be a Sore Loser and only admit The Cassandra was right and apologise very begrudgingly at best (unless they need to beg them to fix the problem caused by this).

Subverted, The Cassandra has every opportunity to say "I warned you!", but doesn't even bat an eye because they know they won't be believed.

This trope is often used after one of the various Threatening Tropes appears only to be ignored, or after a seemingly-mundane threat that is taken lightly turns out to be Not Hyperbole.

Contrast Poor Communication Kills, Not Now, Kiddo, where the information doesn't reach its intended destination. Compare Cassandra Truth and Ignored Expert. Overlaps with Can't You Read the Sign? if the person who originally posted the sign points it out to the characters who got into trouble by ignoring it.

When getting ready for Penny's Halloween party, the guys end up all dressing as the Flash. Sheldon blames it on the fact they vetoed his suggestion to have a costume meeting.

Example of:
Dresses the Same

Alternative Title(s): I Told You So

When getting ready for Penny's Halloween party, the guys end up all dressing as the Flash. Sheldon blames it on the fact they vetoed his suggestion to have a costume meeting.