Recap / The Fairly OddParents S4E18 "Just the Two of Us!" 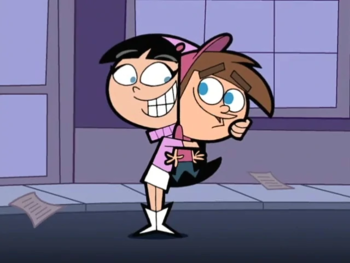 Timmy, Chester, and AJ are the only ones without dates at the ice rink. While Chester resorts to dressing up like a girl and skating with AJ, Timmy's only option is to try and score a date with Trixie, who he's never scored with before. However, she has tons of boys worshiping her already, so in order to get her to date him, Timmy wishes that he, Trixie, and his fairy godparents are the last people left in the universe. Upon realizing that there is no one else on Earth, Trixie tells Timmy to never leave her side, since she needs someone to adore her.

After the two have some fun together, they go to a mall where Timmy cooks some hamburgers. Wanda thinks Timmy should unwish his wish before "you-know-who" gets "you-know-what". Though she's referring to Trixie, Cosmo thinks she's talking about him and gets worried. Timmy does not want to undo the wish since he has been enjoying being with Trixie so far. However, several hours of Trixie becoming increasingly crazy and demanding towards Timmy, he realizes she's gone insane and now wants to unwish his wish. However, Cosmo has become paranoid that Wanda loves Timmy more than him and poofs her away out of jealousy, leaving Timmy to deal with Trixie on his own.

After an unsuccessful attempt to hide from Trixie in some tires, she drags Timmy away by his arm. Timmy starts attempting to chew his own arm off out of desperation, which Trixie immediately takes note of, causing Timmy to finally confess that he wants to break up with her. She doesn't take it well and decides that if she can't have Timmy, nobody can, and tries to kill him, forcing Timmy to run for his life. Wanda gets Cosmo to stop being jealous by acting overly affectionate towards him, allowing Timmy to undo his wish and return everything to normal.