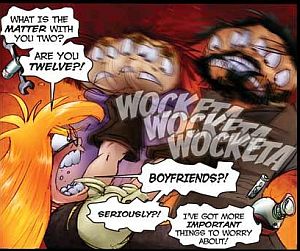 "Wocketawocketawocketa" is exactly the sound minions make when you shake them like this.
"WHAT KIND OF STUPID NAME IS SHAKEN-UNFAIRLY??"
— Complains-of-Names (while shaking Shaken-Unfairly

Falling between the Neck Lift and Metronomic Man Mashing in terms of forcefulness (and physical improbability), the Minion Maracas occurs when a villain lifts one or more minions of theirs and shakes them in mid-air, whether for emphasis or from an excess of emotion. Generally applied only in animation and comedic works, due to issues of leverage. The sound of a cowbell is optional.

If the shaking has the pragmatic reason of letting loose something hidden in the subject's clothes, that's Shake Someone, Objects Fall.