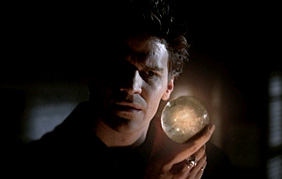 "Passion... it lies in all of us. Sleeping, waiting, and though unwanted, unbidden, it will stir, open its jaws, and howl. It speaks to us, guides us... passion rules us all. And we obey. What other choice do we have? Passion is the source of our finest moments; the joy of love, the clarity of hatred, and the ecstasy of grief. It hurts sometimes more than we can bear. If we could live without passion, maybe we'd know some kind of peace. But we would be hollow. Empty rooms, shuttered and dank... without passion, we'd be truly dead."
— Angelus
Advertisement:

Angelus is still stalking the Scoobies from afar. He watches his former friends leave the Bronze, and later comes into Buffy's bedroom while she sleeps. When she wakes, she finds a drawing of herself, sleeping, on her pillow, so she'd know he's been there.

At school, she asks Giles if there's any way to reverse the standing invitation Angelus has to her home ("No shoes, No pulse, No service"), and Giles promises to look into it. The strain is getting to Buffy — she wonders if her mother should be told, because Angelus is likely to come after her family. Ms. Calendar asks Willow to cover her computer class for her when she's late, and Willow agrees. Buffy and Giles show up, giving the same cold shoulder to Ms. Calendar that they have for several weeks. Buffy leaves with Willow, but Jenny gives Giles a book she says will help to make things right. She admits that she's in love with Giles.

Factory. Dru has brought a puppy to tempt Spike's appetite. Spike wheels off angrily, refusing to be wet-nursed like a child. Angelus struts in and needles Spike about his lack of independence. Bicker bicker. They're interrupted by Dru being crazy some more. She wails that somebody's trying to wreck their happy family. That someone is Ms. Calendar, who visits a local shop and acquires an Orb of Thesulah.

The next day, Buffy is still cold to Ms. Calendar, but nevertheless tells her that Giles misses her.

That night at Willow's house, they find another envelope, this one for Buffy — it's a picture of Buffy's mother, asleep. At the Summers residence, Joyce pulls into the driveway to find Angelus waiting for her in the front yard, impersonating a distinctly deranged Angel. Over her threats to call the police, Angelus drops the bomb about him and Buffy making love. Rattled, Joyce runs inside the house, just as Willow and Buffy read an incantation revoking Angelus's invitation.

Drusilla shows up at the shop Ms. Calendar visited, asking the shop owner what the "bad teacher" wanted.

At school, Ms. Calendar is working late when Giles shows up and invites her over when she's done. He leaves, and she finishes her work — she's found out how to restore Angel's soul! Saving the solution to a floppy disk, she prints it out—and suddenly she realizes she's not alone. Angelus has been lounging in the back row for a while. He breaks the Orb of Thesulah and destroys her computer, burning the printout, and then attacks Ms. Calendar. She runs for her life, but to no avail, and in Buffy's first example of a major Character Death, Angelus catches her and breaks her neck.

Giles returns home to find a rose on his door, champagne in ice, Puccini on the stereo, and a note saying "Upstairs." Climbing the candlelit stairs, his smile on his face vanishes as he sees the dead body of Ms. Calendar in his bed. Cut to the police wheeling the body away. Buffy gets the phone call, with Willow breaking into tears as Angelus watches through the window, practically munching popcorn. Worried about what Giles might do, Buffy and gang rush over to Giles' house. He's not home, and his weapons are gone; they realize that he's gone to the factory to take on Angelus by himself.

At the factory, Spike is up in arms over the "incredibly brassed off" Slayer who is due to hunt them down. Angelus is perfectly cool, until a Molotov cocktail suddenly smashes a foot away, setting the factory ablaze. It's Ripper, coming at Angelus with a full arsenal. He seems to have the upper hand, but is overpowered and at the vampire's mercy. At that moment, Buffy enters the fray. Dru and Spike make a strategic exit. Buffy drives back Angelus and almost has him in submission, but Angelus points at Giles, indicating his unconscious body near the approaching flames. Angelus gets away again as Buffy stops to save her Watcher. Outside the factory, a furious Giles screams that it wasn't her fight, and Buffy's response is to slug him—then hug him tight as they both break down.

Giles and Buffy visit Ms. Calendar's grave, and Buffy apologizes with all her heart for not killing Angelus when she had the chance. "I wasn't ready. But now I think I finally am."

Willow sadly accepts the task of filling in for the computer teacher until a replacement is hired. As she takes her place at the desk, a floppy disk falls unnoticed to the floor...