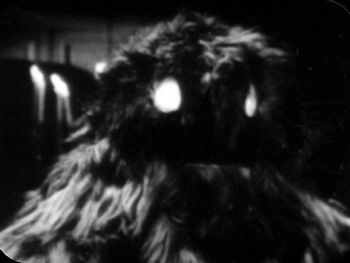 Hey, it's Grimace's evil twin!
Captain Knight: What's a girl like you doing in a job like this?
Anne Travers: Well, when I was a little girl I thought I'd like to be a scientist, so I became a scientist.
Advertisement:

The one with deadly silly string and the debut of DW's resident Badass Normal with the (fake) moustache.

Written by Mervyn Haisman and Henry Lincoln. This six-episode serial first aired from February 3 to March 9, 1968.

Travers, who we last saw in Tibet in 1935, has brought a Yeti control sphere back to England to study and accidentally reactivated it. This gives the Great Intelligence a foothold, and he takes over the London Underground using a web-like substance and attacks by Yeti. (As for where it got the idea...) The military are sent in to try and deal with the problem, along with Professor Travers and his daughter Anne.

Leaving the army under Colonel Lethbridge-Stewart to do the clearing up, the travellers depart for new adventures...

For over 40 years, this story was considered by many to be one of the holy grails of lost episodes. In October 2013, it was announced that film copies of all but part 3 were found at a TV relay station in Jos, Nigeria. It emerged in September 2015 that all six episodes were in fact present, but the third disappeared during the negotiations to get the prints back; almost certainly stolen.

Unfortunately, since he first turns up in Episode 3, the first appearance of Colonel Lethbridge-Stewart is therefore still lost. The story was released on iTunes with a telesnap reconstruction of part 3. A DVD, also featuring the reconstructed part 3, was released February 2014. A Special Edition DVD / Blu-ray with an animated version of the missing episode followed in August 2021.