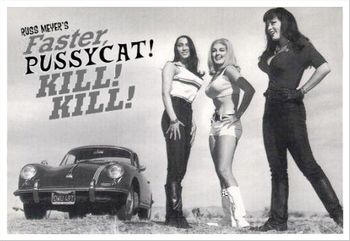 From L to R: Rosie, Billie and Varla
"Ladies and Gentleman go go for a wild wild ride with pussycats, but beware — the sweetest kittens have the sharpest claws. For your own safety, see Faster, Pussycat! Kill! Kill! Wild women, wild wheels, race the fastest pussycats and they'll beat you... to death!"
Advertisement:

A 1965 B Exploitation Film directed by Russ Meyer.

Three thrill-seeking go-go dancers, Billie, Rosie and their leader, Varla, encounter a young couple in the desert while drag racing. After killing the boyfriend with her bare hands, Varla drugs, binds, gags and kidnaps his girlfriend, Linda. On a desolate highway, the four stop at a gas station, where they see an old man and his muscular, dimwitted son, known as the Vegetable. The gas station attendant tells the women that the old man and his two sons live on a decrepit ranch with a hidden cache of money. Intrigued, Varla hatches a scheme to rob the lecherous old man, who is confined to a wheelchair. Unfortunately, the old man and his son prove to be less harmless than first thought, putting the two sides in a life or death struggle.

Faster Pussycat Kill Kill is considered by many to be Meyer's best film, despite being rather tame compared to many of his later films. The film was only a moderate hit in theaters, as Meyer ironically opted to downplay the sexual elements of gratuitous nudity and sex, but it quickly became a cult hit, enduring as Meyer's most notable film in his filmography.