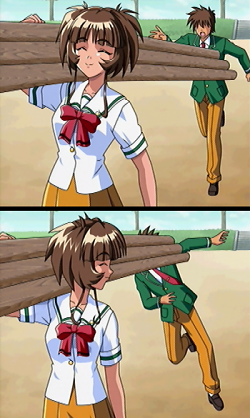 He got logged out.
Train Conductor: Board! Board!
[Passenger looks at watch, sees that it's not nearly time to leave, scoffs; then passenger gets hit by man carrying wooden boards, twice]
Train Conductor: Told ya. Warned ya twice.
— Hot Shots! Part Deux
Advertisement:

A subtrope of Slapstick and Amusing Injuries, this is an old gag where Alice is carrying long items such as planks, logs, poles, or ladders, turns around and accidentally hits Bob, who was standing behind or next to her.

This happens either because Bob called Alice from behind, and she instinctively turned around to greet him, or because she wasn't aware of his presence, or simply because Alice isn't careful of her surroundings.

One common variant is to have the carrying character unknowingly knock out an attacker that was furtively approaching from behind. Another is to have a sufficiently quick-witted character duck the first swing, only to be clocked in the head when Alice turns back around.

This gag find its origins in Vaudeville and Music Hall, leading to its use in the Silent Movie era. Virtually every silent movie, starting from Chaplin to Laurel and Hardy, used this gag at least once, even when talkies came along. The Plank Gag was also a favourite of the Three Stooges. It's still used on stage today in the UK with Pantomime.

In Real Life, safety rules are set up specifically to avoid this situation.

Characters likely (but not necessary) to be involved in the gag are The Klutz for the long item-wielder, and the Butt-Monkey and The Chew Toy for the person suffering the hit.

If you're thinking about a guy getting hit in the face by a board that he stepped on, that's actually a variation of the Rake Take. Also compare Nautical Knockout and Dangerous Backswing. A Plank Gag might be set up, but subverted by the Coincidental Dodge.