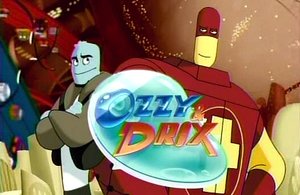 Ozzy & Drix (2002-2004) is an animated spinoff from the movie Osmosis Jones. In this Anthropomorphized Anatomy universe, Ozzy is a white blood cell who recently moved to the "City of Hector" (they were still in Frank at the start of the series but a mosquito bite while fighting a virus transferred them to a new body) and now fights cri—uh, illness—with his partner and friend, a pill named Drix. The show is Edutainment, but in a way that's not too preachy and keeps the action feel of the movie. Each episode covers a topic of health and safety such as cavities, flatulence, or nicotine dependency.

Tropes the series has: