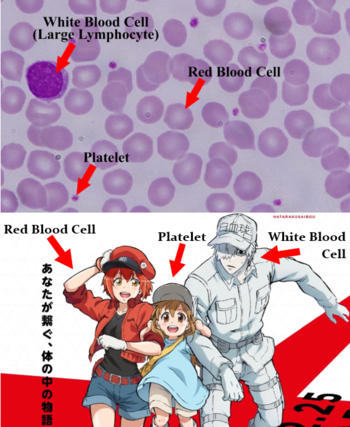 If they bleed, do they bleed regular blood, or even more tiny people?
Timmy: [giving his report on the human body] And so, I learned that the small intestine is actually a high speed water ride. Emotions are controlled by little people in chairs and when you're mean, your heart is a big black hole that sucks up everything!
[beat]
Crocker: F!
— The Fairly OddParents, "Tiny Timmy"
Advertisement:

The human body is one of the most intricately-functioning creations we know about. The cells, tissues, and organs of our body all serve their job, all working towards the common cause of sustaining your life. There are over 200 different types of cells, and 79 types of organs, all with their own unique set of tasks in this mission. So, logically, when depicting these in fiction, what is the best way to portray them individually?

Bring them to life!

This trope is when the inside of the body meets Cast of Personifications. Welcome, to The Human Body!

Walk along the blood vessel streets, on your way from the Stomach Facility to the Office of the Heart. While there, take a look at those hard-working Cardiomyocyte managers, doing their tasks of sending Red Blood Cells (and their deliveries) around the body. Oh no, is that a virus attacking?! Thank God those White Blood Cell police officers are here to fight them off!

Anytime you see Organ Autonomy, you can always expect it to either be paired with this or Animate Body Parts, depending on if the individually-sentient organs and cells are depicted as humanoids or... you know, actual organs and cells. If an ordinary person shrinks down, enters the body, and can interact with these personifications, it crosses over with "Fantastic Voyage" Plot. If the personification is restricted to the thoughts of the brain and emotions, then that is Ghost in the Machine. Sperm as People is a subtrope.