Manga / Cells at Work and Friends! 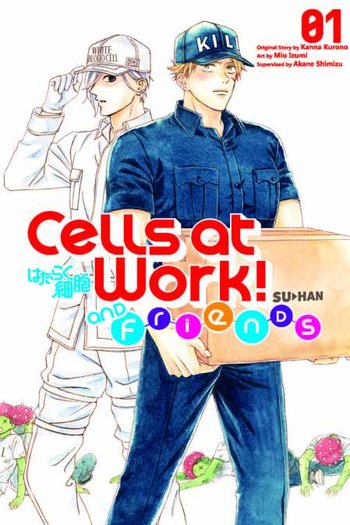 When your identity and profession are centered around being a quintessentially tough and ruthless protector of everyone around you, how do you lighten up and make friends?

This is the core question of Cells at Work and Friends!, a shoujo manga first serialized in Bessatsu Friend starting in February 2019. As its name implies, the manga is a spinoff of the popular Edutainment manga Cells at Work! written by Kanna Kurono and illustrated by Mio Izumi. While Cells at Work! creator Akane Shimizu does not actively write or draw this series, she does serve as its supervisor.

Friends is the story of Killer T, a squad leader of Killer T-Cells who protect a human body. Even though he's a respected and admired leader who can slaughter pathogens with the best of them, he's grown tired of the hyper-aggressive, aloof, and grumpy personality that's left him without close friends and unable to enjoy some of his interests openly. And so, the story is about his efforts to reach out and make friends without compromising his tough-guy image...usually with hilarious results.