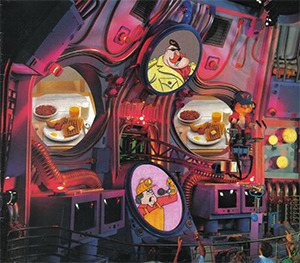 "All right, pinhead, listen up. Your job is to pilot this craft through a typical day's maneuvers without overstressing it. Remember, use your head, don't lose your head. "
—General Knowledge
Advertisement:

Cranium Command was a show featured in Epcot's Wonders of Life pavilion between 1989 and 2007.

The preshow consisted of an animated segment directed by Gary Trousdale and Kirk Wise (who would later direct Beauty and the Beast and The Hunchback of Notre Dame) featuring General Knowledge (voiced by Corey Burton) briefing his "Cranium Commando" troops on their mission: to pilot human brains and keep the people they're in out of trouble. A bumbling little soldier named Buzzy (Scott Curtis) has been given one of the most difficult missions of all: piloting a twelve-year-old boy.

The main show is presented in a theater which is designed to represent the inside of a human head; the outside world is seen on video displays where the eyes would be. Buzzy is an Audio-Animatronic on an articulated seat so that he can move around during the performance. Helping him pilot the twelve-year-old (also acted by Scott Curtis), via appearances on other video screens, are various organs—the logical Left Brain (Charles Grodin), the wacky Right Brain (Jon Lovitz), the hungry Stomach (George Wendt), the panicky Bladder (Jeff Doucette, in an uncredited role), the Adrenal Gland (Bobcat Goldthwait) who is prone to overreacting, and the heart's Right and Left Ventricles (Dana Carvey and Kevin Nealon, reprising their Hans and Franz roles from Saturday Night Live). The Hypothalamus (voiced by Kirk Wise), which regulates autonomic bodily functions, is represented via Audio-Animatronics as a robot.

The show takes Buzzy's host through a typical day: getting up, skipping breakfast, running to school, meeting a cute girl (Annie, played by Natalie Gregory), getting involved in a food fight at lunch, getting sent to the principal (Kenneth Kimmins), and being thanked by the girl, then kissed. At each point in the day, the various organs of the body talk to Buzzy and explain the problems they're facing.