Manga / Cells NOT at Work! 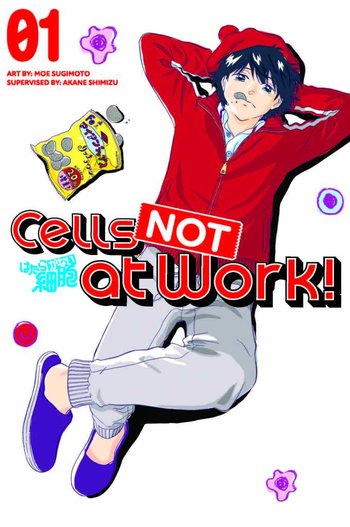 While we think of human beings as singular organisms, on a cellular level they're more akin to the ultimate workplace. Every healthy, mature cell in the human body serves some kind of purpose, and ideally, they all work together to maintain the body's health and well-being. But what if some of those cells simply refuse to get up and go to work?

A Spin-Off of Akane Shimizu's Cells at Work!, Cells NOT at Work! focuses on a small group of Erythroblasts — immature red blood cells — and the Macrophage whose job is to raise them and send them off to work. But unlike most dedicated, hard-working cells, this group refuses to grow up and join the workforce — essentially making them the cytological equivalents of NEETs. Each of them are fully capable of becoming working cells at a moment's notice, but due to various reasons — narcissism, insecurity, or just plain laziness — they continue to live in a nursery alongside literal children.

So begins the comedic adventures of a hapless young Macrophage trying to get this bunch of freeloaders out of the nursery and into the workforce, by hook or by crook... and usually with less-than-successful results.

Illustrated by Moe Sugimoto under Shimizu's supervision, NOT at Work! began publication in the Shonen Sirius anthology in July 2017, alongside its parent comic. Kodansha Comics has licensed the manga for American release, and began publishing it in October 2019.

Cells NOT at Work! provides examples of: