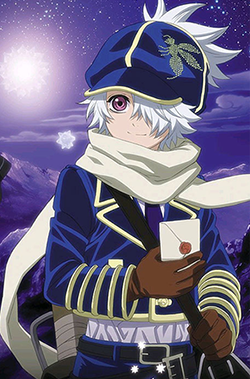 "A courier came to the battle once bloody and loud
And found only skin and bones where he once left a crowd"
— Remember the Alamo
Advertisement:

Why, it's the local Courier! A Courier is essentially a mercantile mailman/woman, delivering messages through cities and towns on foot or other single-person conveyance. In fiction this often comes with some level of danger involved, either from the environment the Courier crosses, the package they're delivering, people who may be after the package they're delivering, or simply through the Courier's own recklessness. Even if there's not an element of danger, there will usually be a tight deadline the parcel must be delivered by, forcing the Courier to bust their hump getting it there on time. Le Parkour or other fancy tricks may be employed to get safely from Point A to Point B (the words parkour and courier both derive from the French for "to run").

Since it's a romantic spy type of job that still allows cynicism with money, combined with the fact that it's an easy way to bring characters to new places or into contact with interesting people, it's ripe for protagonist-hood, but this is not always the case. Can often turn up even in futuristic settings where you'd imagine advanced technology would make human Couriers obsolete, generally as a form of commentary on the presence of a Shadow Dictator in the setting.

See Pony Express Rider for the mounted variety and Unstoppable Mailman for the government-employee version. May involve Deadly Delivery, Shoot the Messenger or You Got Murder. A Venturous Smuggler specializes in illegal deliveries.