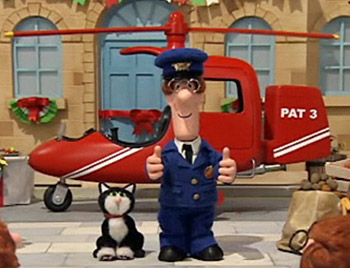 If you've got a world populated by multiple different sapient species, and that world has a postal service, chances are the mail delivery will be handled by a species capable of flight. If the postmen themselves aren't flight-capable but use mounts that are, that's this trope, too.

This trope practically justifies itself; after all, if you need to task someone with mail delivery, why not pick someone who can fly over all the ground hazards and easily land at each mailbox?

Particularly common in Ocean Punk and World in the Sky settings, since the lack of land magnifies the advantages of flight.

Can be a form of Mundane Utility. Compare an Instant Messenger Pigeon, which is not officially a sapient species but often gets the message there as efficiently as if it was. If you're comparing this trope to Flying Dutchman, you're probably reading too quickly.