Literature / Guns of the Dawn 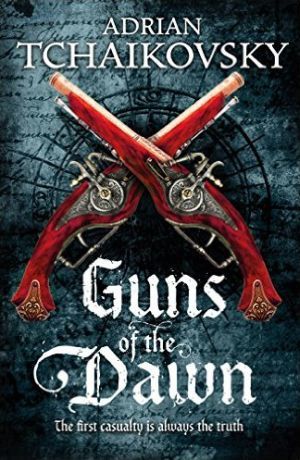 Guns of the Dawn is a stand-alone Fantasy novel by Adrian Tchaikovsky.

The book is set in a world of roughly the same technological level as the Napoleonic Wars. The protagonist is Emily Marshwic, the middle sister of a family of proud lineage but lately diminished wealth. Emily's country, the kingdom of Lascanne, is engaged in a war with neighbouring Denland, which was an ally until a revolution in Denland overthrew its monarchy. To stop the ravaging hordes of bloodthirsty revolutionaries from plunging Lascanne into the same chaos, the good and noble king of Lascanne leads his people in a heroic defence of their beloved country — or that's how most people in Lascanne see it, anyway. The only person who'll present things to Emily in a different light is Mr. Northway, an old enemy of her family — and everyone knows how corrupt and cynical he is, so she's not about to believe him.

The authorities perpetually claim the war is "almost won", and yet, the army always seems to need more and more people conscripted into it. Emily's family does its bit — first her brother-in-law goes to war, then her brother. But when the word eventually comes that one woman from every household will be conscripted too, Emily herself marches off. The battlefield is a hellish swamp, the military leadership doesn't inspire much confidence, and the Denlanders aren't the ill-disciplined rabble people say — and on top of it all, the authorities may have been dishonest about more than just the progress of the war.