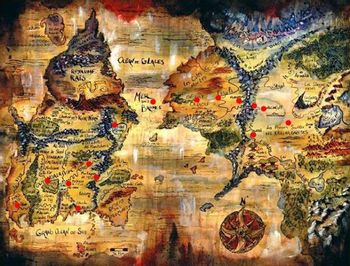 The Gwendalavir Universe is a French Fantasy Literature series of books consisting of four trilogies (plus an aborted fifth one) written by the late Pierre Bottero. All of these books take place in the eponymous world of Gwendalavir.

La Quête d'Ewilan (Ewilan's Quest) : La Quête is the first trilogy in the Gwendalavir Universe. It tells the story of Camille, a young girl who accidentally discovers that she has the ability to travel to the Alternate Universe of Gwendalavir. Accompanied by her best friend Salim, she learns that she actually comes from this world, that her real name is Ewilan, and that she posses an ability known as "Drawing" that allows her to create things from her imagination. It turns out that the guardians of this world, known as "Sentinels", have been imprisoned by evil creatures known as the Ts'Liches, leading the Empire defenseless ; Ewilan will thus go on a quest to free the Sentinels and defeat the Ts'Liches, with the help of not only Salim, but also many other allies encountered along the way.

Les Mondes d'Ewilan (Ewilan's Worlds) : Les Mondes is the second trilogy in the Gwendalavir Universe, and is a direct sequel to the first one. Between the events of the first and second trilogy, Ewilan has been captured in our world by a Secret Government Warehouse that's actually under the orders of Elea Ril'Morienval, a traitor to the Empire of Gwendalavir, and it's up to Salim to rescue her. Afterwards, they will discover that the dimension that drawers get their powers from, known as the "Imagination", is under the control of a demon referred to as the "Medusa", preventing anyone from drawing. The team from the first trilogy thus reunites, and goes on a new quest to destroy the demon and save Gwendalavir.

L'Autre (The Other) : L'Autre is the third trilogy in the Gwendalavir Universe. It follows the adventure of Nathan, a boy who seems to inhumanely excel at every sport he plays, and Shaé, a girl who constantly has to battle with the "Thing", an entity living inside of her that thirsts for blood and forces her to turn into a killer hyena when the thirst takes over. When Nathan's parents are assassinated, he discovers that he is part of several of the Seven Families, seven lineages of individuals with exceptional superhuman abilitiesNote "Guides" can perceive possible futures, "Builders" can build and use doors to an alternate dimension, "Metamorphs" can turn into animals, "Healers" have exceptional healing abilites, "Mnesics" have a whole mental encyclopedia at their disposal, "Scholiasts" can learn instantly anything they see, and "Cogists" have exceptional physical and mental abilities., as his father was a Cogist and his mother a Mnesic. Around the same time, Shaé discovers that she herself is a Metamorph. Together, they'll set off on a quest to destory The Other, an evil entity that was sealed away centuries ago.

Le Pacte des Marchombres (The Shadowalkers' Pact) : Le Pacte is the fourth trilogy in the Gwendalavir Universe, and is a Spin-Off of the first two trilogies. The first two books take place before the Ewilan trilogies, whereas the third one takes place after. It centers around the character of Ellana, and tells the story of her childhood, and how she joined the guild of the Marchombres ("Shadowalkers"). As the story goes on, we see Ellana undergoing the intesive training of a Marchombre, under the tutelage of her master Jilano, but also attempting to fight against a guild of former, corrupted Marchombres : the Mercenaries of Chaos.

Les Âmes Croisées (The Crossed Souls) : Les Âmes is the first book of the incomplete fifth and final trilogy in the Gwendalavir Universe. It tells the story of Nawel, a pretentious and arrogant 17 year old girl. As part of the highest social class, she is destined to join one of nine casts, named Robes, that will determine her future role : Mage, Ruler, Priest, Healer, Magistrate, Scribe, Engineer, Historian, or Geographer. However, after her arrogance causes the death of a low social class woman and her child, she starts questioning herself and her choices, and ends up deciding to join the mysterious tenth casts known as the Armours, whose duties involve protecting the people of the land against ancient dangers. Published posthumously, its ending seems to indicate that the rest of the trilogy would've tied every universe established in the previous trilogies together.