Literature / The Guild of Specialists 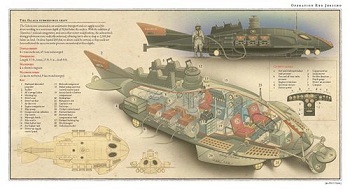 Intricate multi-page diagrams aren't even the start of it. See a bigger version of this one Here

The Guild of Specialists trilogy is a series of novels by children's author Joshua Mowll, published by Walker Books, and each one of the three books is an absolute work of art. They are designed to look like diaries and are filled to the absolute brim with maps, diagrams and sketches, some folding out to as much as four or five pages. There are antique photographs (purportedly) of the characters and settings and museum-style photographs of objects that appear in the books. It is truly something to behold and the level of immersion the books create is fantastic.

The premise is thus, after the death of his grandmother, Rebecca MacKenzie, the author discovered a hidden passageway behind a bookcase in her house. This led him down a flight of stairs to a series of vaults (there are colour photographs and diagrams of everything described). After "persuading" one of them to open the author enters it to discover a rich and varied treasury of objects, artefacts, notes, and diaries that tell the story of her life. The three books that follow are that story, and the objects, diagrams, and photos contained therein all come from that secret collection. It's a truly awesome premise that will suck you in hard and suspend your disbelief from the yard-arm.

The series follows the lives of Rebecca and Douglas MacKenzie in their quest to find their parents after they disappeared while on an expedition to the Sinkiang desert in China. The children soon discover that they were members of a secret society known (where it is known) as The Honourable Guild of Specialists.

The books have been widely praised for their elaborate setup and their incredible ability to make you wonder if you might not, somehow, be reading a real account.