Direct Line to the Author 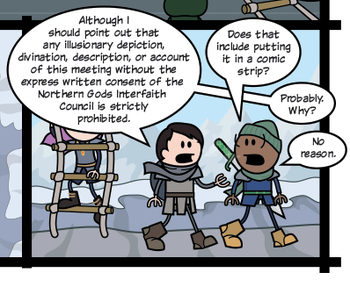 At least the spooky wizard

who lives by the coast seems not to mind so far.

Sometimes, "this is a true story" is part of the fiction.

Once in a while a really well written story can feel so real that you begin to wonder if it might not be based on a true story. Occasionally this is actually the case, or supposedly so, but there are times when an author (etc.) will go right out of their way to create greater immersion in their work by claiming that their very obviously fictional and fantastic world is in some way real. Usually they claim that they didn't come up with the story; rather, it was recounted to them by the actual main characters (or some other witness), often physically, but sometimes by phone or magic. Other times they will claim that they found the account in the form of a diary and novelised it, or, if it is a film, that it comprises found footage or a mixture of found footage and Dramatisation.

Another common method is to claim that the book was written as a testimony (or confession) to actual events - possibly the most notable example of this is The Guild of Specialists trilogy, which takes the love that boys' annuals have for intricate diagrams and maps to its absolute extreme and fabricates not only a plethora of large diagrams, maps, and sketches, but photos and objects. In this version the author pretends they are simply publishing something that someone else has written - this often takes the form of a novelization of a diary or a set of notebooks. Other methods include accounts by secondary characters and so on. This trope, a staple of children's books and fantastic tales, often features an Author Avatar or even instances of From Beyond the Fourth Wall or other strangeness and may be said to be translated from accounts of what happened or books written by the characters and never actually communicated in person.

In all these cases, however, it is considered canon that the author is repeating a story that is in fact true, if only to a certain degree. One of the people the story is about may even be the author themselves.

Compare …And That Little Girl Was Me, and Based on a Great Big Lie.

Absolutely not to be confused with Literary Agent Hypothesis, when fans think that maybe the story is actually real, or like to think it is, but don't have any support from canon or Word of God. Also not to be confused with A True Story in My Universe, for In-Universe examples. Often ties in with Author Avatar and may involve an admitted Unreliable Narrator.

Note: This trope only applies to canon and Word of God examples in fictional works. In-Universe examples go in A True Story in My Universe. Pure Fanon examples go in Literary Agent Hypothesis.