Literature / The Thief of Baghdad 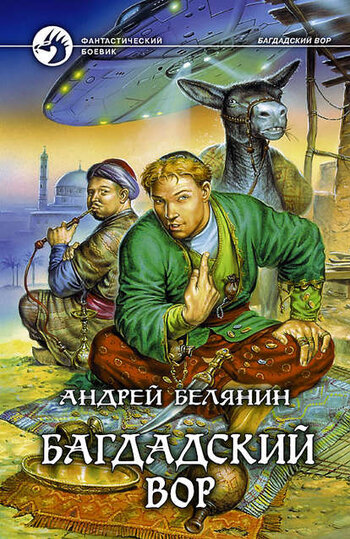 The Thief of Baghdad (Багдадский вор, Bagdadskiy vor) is a trilogy of novels written by Russian fantasy author Andrei Belyanin. The stories retell the tale of the character in an original manner, full of deliberate anachronism, magic, and Time Travel. Belyanin claims that the titular thief is a friend of his named Lev Obolensky, descended from a long line of Russian nobles. In the first novel of the same name, the author retells the story told to him by Lev, who insists that he was transported to Baghdad during "Arabian Nights" Days by a Literal Genie, who was commanded by Omar Khayyám (a famous Persian poet and, according to the novel, thief) to bring him "the greatest thief in the world". Instead, the genie (named Babuday-Aga) brings him a modern-day Russian man with absolutely no knowledge of thievery and Laser-Guided Amnesia. Not remembering who he is beyond his name, Lev begins to treat Omar as his own grandfather, and the genie uses magic to teach him the art of stealing. Omar's goal is to shame the ruler of Baghdad, Emir Selim ibn Harud al-Rashid, whose draconian anti-thievery laws have cost Omar many of his friends. Along the way, Lev befriends Hodja Nasreddin (a Muslim folk hero) and a donkey he names Rabinowitz. He ends up shaming the Emir's chief guard Shehmet, sneaking into the Emir's harem and "enjoying" his many wives, freeing a beautiful woman from her ghoul husband, making First Contact (and ending up convincing the peace-loving aliens to stay the hell away from Earth), and nearly getting the Emir to marry him. The genie then brings him home, and Lev goes to his writer friend to tell him the story.

In The Shamer of Shaitan, the genie once again sends Lev into the magical past, this time into the city of Kokand. The city guards, headed by Aslan-Bey, almost immediately capture him and bring him before Sultan Muslim al-Luli Suleiman ibn Dode, the city's ruler. The Sultan demands that the famous Thief of Baghdad steal him a certain woman to add to his harem. Then the Sultan's chief vizier turns out to be none other than Hodja Nasreddin in make-up, hiding right under Aslan-Bey's nose, who wants to capture the famous troublemaker. This time, Lev has all his memories and wants to go home, but he assumes that the genie wants him to shame Aslan-Bey and the Sultan of Kokand. Along the way, he meets many of his old acquaintances, including the beautiful widow Jamila (who is deeply in love with him but know he can't stay with her) and the cobbler Ahmed (the husband of the woman the Sultan wants). Lev ends up meeting and making an enemy of Shaitan himself and, eventually, realizes that the enemy of all humankind is the real target of his shaming. He finally manages to reach Samarkand and reunite Ahmed with his estranged wife, humiliating the demon along the way. The genie then appears and sends him back to the 21st century.

In Return the Thief!, the author finally meets Nasreddin, who has somehow ended up in the modern times. It is Nasreddin who tells the author of Lev's latest adventure in ancient Bukhara. This time, the genie brings Lev back to the past not to shame a particular person (or demon) but to prevent a war that threatens to engulf all the entire Muslim world.

The trilogy provides examples of the following tropes:

Alternative Title(s): The Thief Of Bagdad