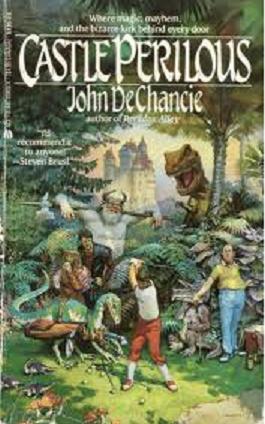 Take the High Concept of a gigantic castle at the center of The Multiverse, where every door or window can lead to another world; add in numerous characters from those worlds, each with his own special talent he develops just by being there; and then throw them into various wacky hijinks and screwball comedy, and you get John DeChancie's Castle Perilous series.

Novels in the series are:

Join Gene, Linda, Snowclaw, Sheila, Thaxton and Dalton, Kwip, Jeremy, and many, many more as they search for a way home, learn to adapt, and have incredible adventures both ridiculous and frightening, all while Lord Incarnadine ("Inky" to his friends) and his family work to keep the castle and its 144,000 worlds stable and safe (though not always sane). It's thought-provoking, it's crazy, it's weird, and it's unexpected, but it's almost always hilarious. Sadly, the author seems to have abandoned the series, leaving it on quite the Cliffhanger, but it is still worth a read for its entertainment value alone.

The castle’s 144,000 Aspects include the following tropes (and many more!):