Literature / The Castle in the Attic 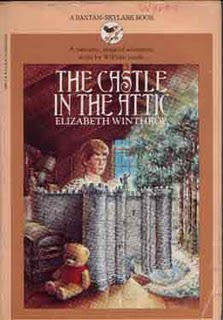 It's William Lawrence's 11th birthday. The housekeeper, Mrs. Phillips, who has always taken care of him, supported him, taught him of goodness and nobility and chivalry, and looked out for him while his parents are busy working—even been a spotter for him in his gymnastics routines—is going away. She's homesick for England, believes he is old enough to take care of himself, and thinks he needs to get close to his parents again instead of depending too much on her. Being young, he doesn't take it well...so she gives him a going-away present, a fantastically realistic stone and wood castle which has been passed down through her family for generations. Though he sees it as a bribe and wants to hate it, he can't. One night he goes up to the attic to play with it, and "introduce himself" to its lone toy soldier, the Silver Knight.

But when he picks the figure up in his hand, he becomes real and alive...

A beloved children's classic by Elizabeth Winthrop in the same vein as The Indian in the Cupboard and Bridge to Terabithia, The Castle in the Attic tells the tale of William, a boy with "a gentle heart" that turns out to be his special gift, and how when he discovers the toy soldier in his model castle is actually Sir Simon of Hargrave, a knight par excellence, he becomes drawn into a world of magic, danger, and fantasy where only he can help bring down Alastor, the Evil Sorcerer who is responsible for Simon's banishment and much worse besides. Oh, and Mrs. Phillips has a role to play too...

Though filled with genre tropes and in many respects formulaic, it is notable for its realistic narrative and dialogue, memorable characters, charming feel, and genuinely exciting adventure. The author has a definite artistry in her language that draws young readers in and even can still enspell older ones returning to it after many years. It is not surprising the book was a Children's Choice book and a winner of several awards such as the Dorothy Canfield Fisher Children's Book Award and the California Young Reader Medal. Even Madeleine L'Engle and Lloyd Alexander recommended it.

A sequel, The Battle for the Castle, was written almost ten years later, concerning William returning to Simon's kingdom, this time with his friend Jason in tow, where they encounter new characters and have to face off with a darker, more insidious, and disturbing evil than the wizard.

The sequel is more of a straight-up adventure story, but does have the same type of cross-cultural charm in the first book, as the modern-day William and Jason interact with the medieval citizens and both are exposed to things far outside the world they know.