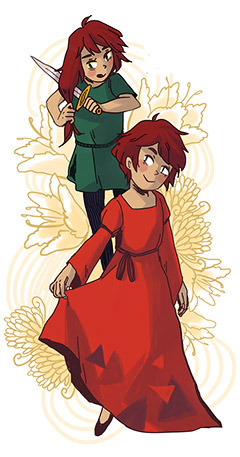 From The Prince and the Princess.

A popular plot where a set of twins or identical acquaintances trades places or pretends to be each other. This can be to fulfill the other's responsibilities, such as a test or a date, or to experience their life in a Grass Is Greener moment.

The advantage in having a twin — or a Doppelgänger — is that one can pretend to be the other because of their similar or identical appearance. The disadvantage to all this, however, is that the twins in question are usually Polar Opposite Twins — the wild one must pose as the book learner to successfully fool a boyfriend on a date, or the book learner has to be a party animal to fool their friends for example.

When this situation occurs, especially in a series, An Aesop almost invariably follows. It's almost always the same Aesop every time: the twins learn that each others' lives both have their ups and downs.

One should note that in real life it is much harder for twins to pull this off. They don't always have the same hairstyle, body weight, or voice. And unless the two are very young and haven't yet developed secondary sexual characteristics the odds of twins of differing genders successfully fooling others is extremely low.

See also Tag Team Twins for a different type of Twin Switch and Twin Test, which may involve a Twin Switch if you're dealing with some Trickster Twins. Compare with Prince and Pauper. Contrast Fake Twin Gambit. Subtrope to Identical Twin Mistake.

Faced with her own elimination, Sammy tricks her Evil Twin Amy into eating a poisonous fruit that renders her unable to speak, and then poses as her, getting Amy eliminated in her place.

Faced with her own elimination, Sammy tricks her Evil Twin Amy into eating a poisonous fruit that renders her unable to speak, and then poses as her, getting Amy eliminated in her place.