Manga / Living for the Day After Tomorrow 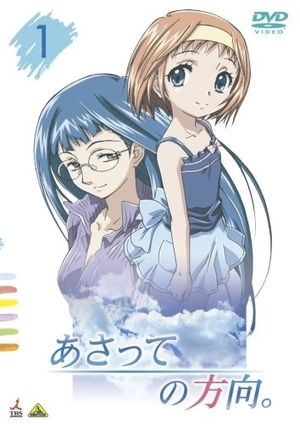 There are things you won't reach even with outstretched hands... There are things that will fade into the distance once you let go. People are always seeking those, and before they know it, they become lost. This is a story of such a summer for us...
Advertisement:

Living for the Day After Tomorrow (Asatte no Houkou) is a manga by J-ta Yamada which ran in Comic Blade Masamune from 2005 to 2007. It received an anime adaptation in 2006.

Iokawa Karada is a little girl who lives with her older sort-of brother, Hiro. Nogami Shouko is Hiro's ex-girlfriend, whom he unexpectedly left behind. When Shouko is unexpectedly reunited with Hiro, the girls come into conflict, leading to hurt feelings all around. Still upset, they both find themselves together at a small shrine housing a stone that, according to local legend, will grant wishes.

They didn't expect it to actually work. Karada is suddenly now an adult, and Shouko is a child. Suddenly nobody recognizes them, they don't have any clothes that fit (Shouko even needs new glasses), and Karada has to deal with being an adult, all while Hiro and friends are in a panic about Karada's sudden "disappearance."