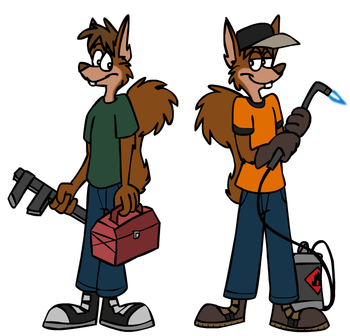 The fastest and furriest on four wheels!
Advertisement:

Transmission is a furry webcomic created by Mark Alexander Smith about red squirrels Russell and Reggie, who are identical twins. They are English car mechanics living in Southern California.

Most of the comic's story arcs revolve around British and American cultural divisions, but also around the characters' love of motoring and exploration. The comic was inspired by the author's own trips to America.