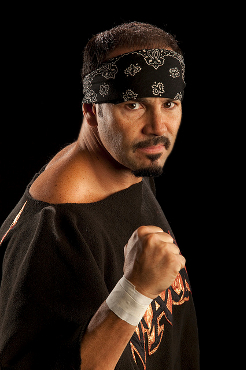 Salvador "Chavo" Guerrero IV (born October 20, 1970) is a third generation Mexican-American Professional Wrestler best known for his work in WCW and WWE as Chavo Guerrero Jr. He debuted in 1994 competing in Mexico and Japan, arriving in WCW in 1996. He primarily participated in the 6 and 8 man Lucha tag team matches that WCW often opened their cards with and was on the winning side somewhat more often than many of his peers, but he saw next to no singles success. His career picked up a bit when he started feuding with his uncle Eddie Guerrero.note Important relation note: Although Eddie is Chavo's uncle, it's important to note that Eddie is nearly a generation younger than Chavo's father. There's only three years between Eddie and Chavo Jr., so they grew up more as cousins than uncle/nephew, and their bond was often described as being as close as brothers. The idea was that Chavo was trying to stay a Face, and Eddie kept pressuring him to embrace the "Cheat to Win" philosophy. This led to Chavo going "crazy" and introducing "Pepe," his stick horse.note Think Al Snow's "Head" gimmick. Chavo would go on to hold the WCW World Cruiserweight Title

once, as Lt. Loco, with Corporal Cajun (Lash LeRoux) while in the Misfits in Action. After WWE bought WCW, Chavo was brought in as part of the InVasion/Alliance angle. Over his time in WWE, he would hold the now-WWE Cruiserweight Title 4 times, the WWE SmackDown! Tag Team Titles

twice with Eddie, and the WWE ECW Heavyweight Title

once. He left WWE in 2011 for the independent scene. He debuted in TNA in 2012 and is a 2x TNA World Tag Team Champion

More recently, Chavo was one of the top heelsnote and also one of the producers of Lucha Underground, the critically acclaimed wrestling show on Robert Rodriguez's El Rey Network. He is a one-time Gift of the Gods Champion there. He also appeared in Season 2

of GLOW (2017) after previously working as a fight coordinator and wrestling trainer for Season 1.