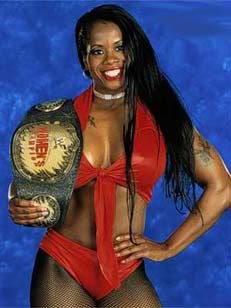 Jacqueline DeLois "Jackie" Moore (born January 6, 1964) is a retired American Professional Wrestler, manager and trainer from Dallas, TX best known for her work in the USWA in Memphis, in WCW and WWE during the 1990s. She started in 1988 as the only woman to graduate from General Skandor Akbar's wrestling school. She was first known as Sweet Georgia Brown before establishing herself as Miss Texas. She made her name in Memphis by regularly beating up both women AND men. She also worked in SMW as Sgt. Rock, won the women's title of Herb Abrams' UWF and was a member of the USWA arm of The Nation of Domination as Queen Moesha. Kevin Sullivan brought her into WCW in February 1997 as his second/valet, and she would beat up his opponents on the floor during his Squashes. After the Dungeon of Doom ended, she switched to managing Harlem Heat (Booker T and Stevie Ray) before having a quick feud with WCW World Television Champion

Disco Inferno. She made her PPV debut in a non-title (because WCW wouldn't/couldn't sanction an intergender match for a title) win over Disco at WCW Halloween Havoc 97. She arrived in WWE on the June 1, 1998 Raw as "Marvelous" Marc Mero's replacement for Sable, who Mero had defeated the night before at WWF Over the Edge 98, forcing Sable to have to "leave" the company. Of course, Sable returned, and they feuded, leading to the reintroduction of the WWE Women's Title

that fall, which Jackie won. She lost the belt to Sable at Survivor Series 98 and didn't regain it until she beat Harvey Wippleman for it in February 2000. She later lost it to Stephanie McMahon-Helmsley and never got it back. She was eventually Demoted to Extra and used as a trainer for the first season of WWE Tough Enough and at WWE's developmental promotion OVW before suddenly coming back to defeat Chavo Guerrero Jr.. for the WWE Cruiserweight Title

on the May 6 (taped May 4), 2004 WWE SmackDown!. She lost the belt back to Chavo at WWE Judgment Day on May 16th and was released. She went on to win the Independent Association of Wrestling women's title, then later showed up in TNA, eventually settling into the roles of manager for Beer Money Inc. and competitor in the Knockouts Division. She has also competed for Lucha Libre USA, the WWC in Puerto Rico, LLF in Mexico, WSU and Power Pro Wrestling in Memphis. She has long been considered one of the best female wrestlers in the business, especially during the 1990s and was one of the original WWE Divas. She was inducted into the WWE Hall of Fame in 2016.