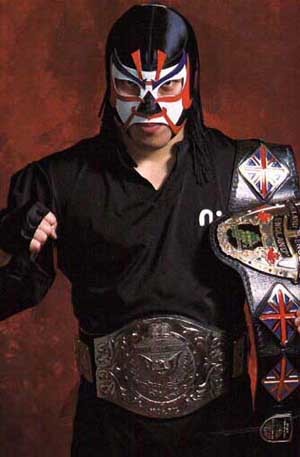 "Giving him a ladder is letting him commit suicide."
—Shu Sato about The Great Sasuke's wrestling style.
Advertisement:

The Great Sasuke (born July 18, 1969, real name Masanori Murakawa) is Japanese Professional Wrestler, promoter and politician best known for his work in New Japan Pro-Wrestling and his own promotion Michinoku Pro Wrestling. A Gran Hamada trainee, he debuted in 1990 for lucharesu promotion Universal Lucha Libre as MASA Michinoku, but after a trip to Mexico, he went to form Michinoku Pro Wrestling, giving birth to one of the most legendary wrestling companies. He changed his name to The Great Sasuke and adopted the persona of a fearless masked ninja, becoming known for his high-risk wrestling, revolutioning the Japanese cruiserweight scene and having legendary matches with Jushin Thunder Liger, Último Dragón and other names. Sasuke was the first wrestler in winning the eight titles J Crown championship, and figures as the most decorated wrestler in Michinoku Pro's history. Known for his love of crazy stunts and his outspoken demeanor, Sasuke has been one of the solidest babyfaces in puroresu, only wrestling as a heel during his SASUKE age and his most recent Mu no Taiyo angle, and has worked in almost every promotion in Japan.