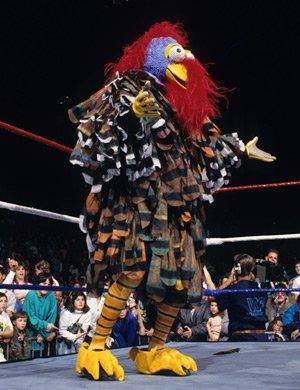 "This may have been the single greatest bit of promotion not just by Vince McMahon and the WWF, but in the entire storied history of this great business. You may laugh, but I speak in earnest. Think about this: for months, the WWF carted around a giant egg. All the company ever said was that the egg would hatch at Survivor Series. That was it - they didn't say something magical was going to be inside, nor that it would change the course of mankind. Heck, they didn't even say it would impact the show itself. They just said, "We have an egg, it's going to hatch." That's it. Now think about this - there were people who were actually intrigued by this and spent money to see an egg - a GIANT EGG! - break open at a wrestling show. If that isn't evidence enough that Vince is, in fact, the greatest promoter who ever lived, I don't know what is."
— RD Reynolds, WrestleCrap
Advertisement:
"Everybody has speculated as to what might be in the egg. Is it a dinosaur? Is it a rabbit? Balloons? Is it the Playmate of the Month? Heh, who knows? Well, the way it sounds to me right now, the speculating is all over! Oop, stand back! I think that egg is ready to blow!!" * And blow it did.
— "Mean" Gene Okerlund, Survivor Series 1990

At Survivor Series 1990, out from a gigantic egg that had been carted to WWF events for weeks - which fueled tons of rumors about a new wrestler debuting, or something even bigger - came Hector Guerrero (Eddie Guerrero's brother) dressed in a gigantic turkey costume, complete with googly eyes and a muted, garbled speech upon being interviewed by Okerlund. The crowd response was a Stunned Silence, followed swiftly by a section of boos. Okerlund carried on with the segment by dancing in the ring with the Gooker (to "Turkey in the Straw") while Gorilla Monsoon and Roddy Piper tried to remain enthusiastic on commentary, which did little to conceal the awkward silence from the Hartford, Connecticut crowd. Perhaps they were expecting the egg to hatch out anything other than a poorly executed segment that was poorly conceived in the first place note (such as, perhaps, items to represent food and other essentials given to the families of servicemen stationed overseas for what was then "Operation: Desert Shield"). Or maybe just anything that was less of a turkey than a dude in a turkey costume coming out of an egg. To the Gooker's credit, some people did join in for Okerlund and Gooker's dance, though that did little to actually improve the situation.

The character was rumored to be something of a mascot for the WWF, and Gooker segments with Koko B. Ware, Tugboat and The Bushwhackers were taped around the same time. Almost immediately after this reception, however, the Gooker gimmick was canned by the WWF, and not mentioned again except as a bit of Self-Deprecation on the part of the company. The Gooker made a return at WrestleMania X-Seven for the Gimmick Battle Royale (played once again by Hector, who was the second wrestler eliminated, after Repo Man.) WrestleCrap's yearly award for the worst gimmick/storyline in wrestling is referred to as the Gooker Award, and RD Reynolds made the whole incident the first chapter in the inaugural WrestleCrap book.

Through all the running gags, nostalgic chuckles and speculation on why it happened or where it would have gone, it remains one of the most infamous moments in WWE history.

During Survivor Series 2020, thirty years after his debut, the Gooker (this time portrayed by Drew Gulak) returned to a much more positive reception, briefly managing to win the 24/7 title from R-Truth during the pre-show before losing it to Akira Tozawa later in the event, who in turn immediately lost it back to R-Truth.

Tropes associated with the Gobbledy Gooker include: