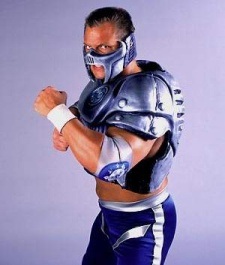 "Our world is about to change
In each of us burns the fury of a warrior
Enter the realm
Blood Runs Cold"
—The promo WCW aired in spring-summer 1996 to hype Glacier's debut.
Advertisement:

Raymond M. Lloyd (born May 13, 1964 in Brunswick, Georgia) is an American martial artist, actor and professional wrestler from Brunswick, GA best known for his time in WCW as Glacier from 1996-1998. His gimmick was based on the character Sub-Zero from the Mortal Kombat series of video games as part of an angle called Blood Runs Cold, also involving Mortis, Wrath, manager James Vandenberg, and Glacier's only ally Ernest "The Cat" Miller. The angle is considered to be a flop, and has even been labeled a Big-Lipped Alligator Moment, as it did not really fit in with everything else that was going on in WCW at the time. He started his in-ring career as "Ray Lloyd" in the late 1980s and was a TV Jobber for WCW against such opponents as The Great Muta and the Skyscrapers (Sid Vicious and Dan Spivey). He also competed in the Japanese shoot-style promotion UWFi. He has also competed for CHIKARA, Pro Wrestling ZERO1, Dusty Rhodes' Turnbuckle Championship Wrestling and for several other independents, particularly in the Florida and Georgia areas, and appeared at All Elite Wrestling's Double or Nothing show. He is a 1x NWA World Tag Team Champion