I Was Beaten by a Girl 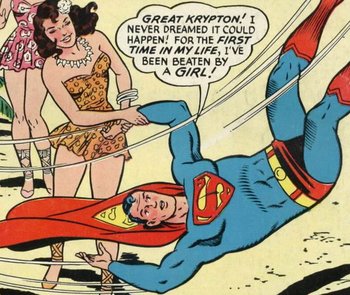 "Nooooooooo! Impossible! I can't be beaten by a little girl! I'm a warrior!"
— Vikke (upon being killed by Juliet Starling), Lollipop Chainsaw
Advertisement:

Rationale for No Guy Wants an Amazon. Waif-Fu may be in evidence. Related to Samus Is a Girl, if the man wasn't aware his opponent was female before losing. May be the punishment of the Straw Misogynist, whose sole purpose is to be beaten by the woman. Also expect this to be said by a He-Man Woman Hater before an aesop about girls being as good as boys.

This trope doesn't cover all situations where the girl wins the fight — the guy has to feel a particular injury to his pride because of the situation, especially if it bothers him above and beyond simply gets his ass kicked by a supposedly weaker foe. Sometimes may be invoked by an Arrogant Kung-Fu Girl if she wants to insult him (i.e. "How strong are you really if I could beat you?").

Truth in Television: there are some men that really feel this, especially considering the societal gender belief about men being stronger than women.

Only Bianca would ever be able to call the mighty Captain Barnacles "Feather Paws".

Alternative Title(s): Beaten By A Girl

Only Bianca would ever be able to call the mighty Captain Barnacles "Feather Paws".