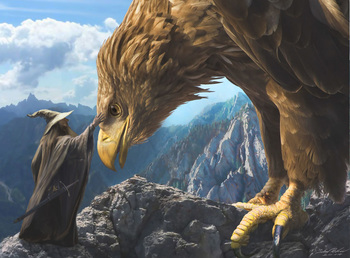 by Ivan Cavini. Used with permission.
"While I fly, follow me in the shadow of my wings."
— Jatayu, The Ramayana
Advertisement:

Few animals radiate the strength and majesty of birds of prey. They're fast, powerful and look intense, netting them a spot right at the top of both the food chain and the minds of people worldwide. From Roman symbols through medieval heraldry right to the forefront of American cultural symbols, they have almost always had a proud and noble reputation. Whether a character in their own right or a symbol of the strength of another, raptors are not to be sneered at.

Though always considered powerful and usually majestic, certain birds have their own special attributes as well. Eagles, for instance, are associated with power, royalty and empire while hawks represent aggression even in the English language itself. Of course, being symbols of pride and power is not always a positive thing: They can also be portrayed as cruel or merciless, this portrayal being commonly attributed to falcons.

If they appear in a Funny Animals setting you can expect them to be among the most badass members of the cast and with a fearsome reputation. In a world with only humans, they may appear with the real world usage of heraldry or perhaps utilized by a Warrior Prince as a Cool Pet. Two-headed eagles, historically the symbol of several historical empires, are particularly associated with heraldry, empires and royalty.

Compare Divine Birds. Contrast Feathered Fiend and Brutal Bird of Prey for more atrocious avians. See Giant Flyer for enormous birds. It should also be noted that, while owls and vultures are also considered birds of prey, they usually have different connotations in fiction. Only add examples pertaining to them here if they fit the "noble, majestic, badass hero" stereotype. See American Eagle for a specific kind of bird often portrayed this way. Compare Doves Mean Peace.

While Peacemaker and Vigilante are trying to escape from the cops, Eagly helps them by swooping in and attacking the cops.

While Peacemaker and Vigilante are trying to escape from the cops, Eagly helps them by swooping in and attacking the cops.