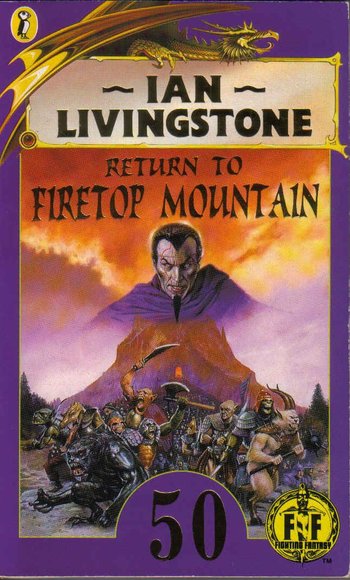 Return to Firetop Mountain is the 50th entry in the Fighting Fantasy series of gamebooks, written by Ian Livingstone as a Milestone Celebration and nod to the first book of the series, The Warlock of Firetop Mountain.

Ten years ago, an heroic and selfless adventurer braved the dangerous maze under Firetop Mountain and faced its diabolical master, the evil Warlock Zagor, eventually killing the evil master of Chaos once and for all... Or so it was thought. Chaos Wizards such as Zagor himself have ways to cheat death, and the Warlock was prepared. After ten years of silence and peace, a new threat rose from Firetop Mountain: the animals fell ill, the soil darkened and the people of the nearby village of Anvil are attacked by night horrors who kidnap people and drag them back under the mountain, where their bodyparts are harvested to reconstruct Zagor's body. You are an adventurer looking for fame and fortune, and the dire situation of Anvil's village is the right situation for you to be the hero. With the help of the people of Anvil, Kaad and Yaztromo the wizard you'll have to find a way to infiltrate the dungeons under Firetop Mountain, make your way to the sanctum and defeat Zagor one more time, for the good people of Allansia.

The book is to The Warlock of Firetop Mountain what Trial of Champions was to Deathtrap Dungeon, an elaborated sequel which revisit the same location with a fleshed-out backstory, brand new puzzles and encounters and a new set of plot coupons to gather in order to finish the game alive.

The Zagor trilogy finally concludes itself with the third and last book, Legend of Zagor.