Literature / Island of the Undead 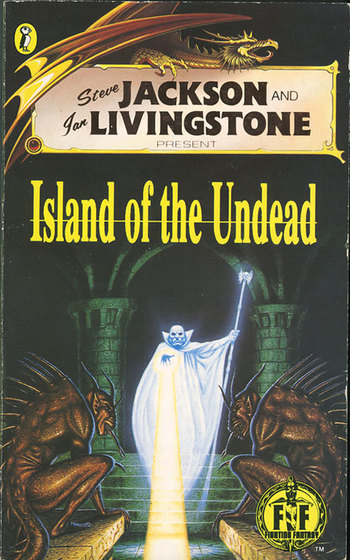 Island of the Undead is the 51st entry in the Fighting Fantasy series of gamebooks, written by Keith Martin (author of Vault of the Vampire).

Many years ago, powerful wizards studying the powers of Magic and of the Elements of nature decided to establish a colony on Solani Island, not too far away from the shores of Allansia's Strait of Knives. Their presence kept undesired threats at bay from the fishing villages, but suddenly, something went wrong. Mysterious storms stroke the sea and the coast, and living dead suddenly roam the land, seemingly coming from the sea itself, and no-one has heard anything from the Wizards of Solani. The village elders decide to sent you, the strongest and bravest villager, to sail to Solani and investigate the cause of this disaster. There, shambling dead, arcane horrors and deadly secrets awaits you.

Island of the Undead follows the expected format of many adventures of the series, with some unique twists, including the score of Presence, which helps you fighting the undead and makes people react better to you, along with puzzles and codes required to proceed along the story.

Island of the Undead provides examples of: