Literature / Island of the Lizard King 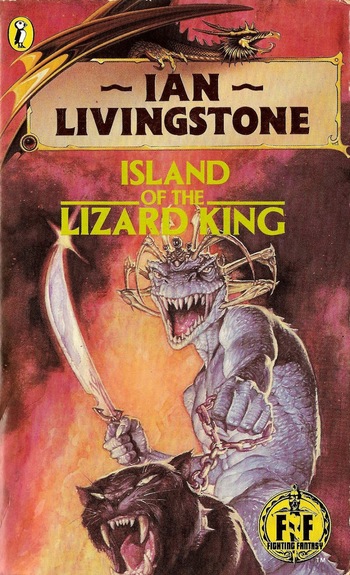 No, that thing on his head is not a crown...
Advertisement:

Island of the Lizard King is the seventh entry of the Fighting Fantasy series of gamebooks, written by Ian Livingstone.

You were leaving Fang southward when you decided to make a detour for Oyster Bay, to take a few days of rest along with your old friend Mungo. However, you soon find out that your holiday will have to wait: the nearby Fire Island, formerly a prison owned by prince Olaf and manned by a garrison of Lizard Men mercenaries, and later a research facility where unhortodox experiments were held, was taken over by the rebellious mercenaries: a Lizard Man far bigger and more cunning than the rest, known as the "Lizard King", Is now ruling the island with an iron fist, sending his troops of non-humans to raid the coastline and enslaving whole villages in order to turn Fire Island into his personal empire. Moved, you decided to lend your help to the people of Oyster Bay and embark on a dangerous mission, ready to fight the servants of the Lizard King as well as hordes of dangerous monsters dwelling on the island.

Compared to previous (and later) works from Livingstone, Island of the Lizard King is overall easier, featuring different ways to advance through the island and less mandatory items to collect (though one or two may be mandatory).

Has a Spiritual Successor, Battleblade Warrior which similarly deals with Lizard Men enemies.

See also The Keep of the Lich-Lord and Island of the Undead for similarly-structured adventures.

Island of the Lizard King provides examples of: