Literature / Vault of the Vampire 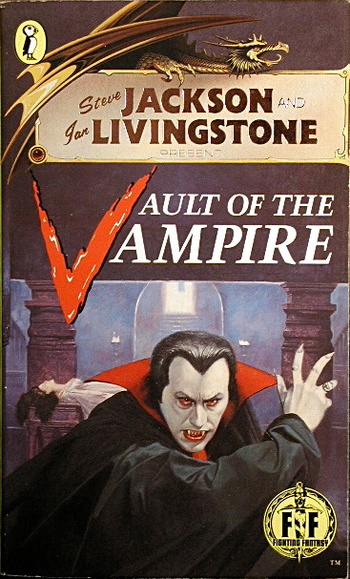 Vault of the Vampire is the 38th entry in the Fighting Fantasy series of gamebooks, written by Keith Martin.

You are a bold and daring adventurer travelling across the Old World of Titan: in the haunted lands of Mauristania you reach the village of Leverhelven, whose inhabitants are plagued by the presence of a terrible and ancient evil in the shape of Count Reiner Heydrich, a vampire lord. After hearing that he recently kidnapped a young girl from the village and took her to his castle, you decide to help the villagers and rid the world of this monster, facing the dark perils of the Vampire's castle.

The book is a standard, well-written horror adventure: in addition to your usual scores you also have a fourth score, Faith, which can be used to repel certain opponents and acts like a sort of Karma Meter. Of course, you can also get certain Afflictions which may give you maluses or outright cost you your life during your quest. Furthermore, since most of the quest takes part inside the castle, you have a slightly bigger chance of exploration and can, sometimes, revisit certain locations. Martin would later wrote a direct sequel to this story, albeit with a different hero, titled Revenge of the Vampire.

Vault of the Vampire provides examples of: